I have no doubt that the majority of gun control supporters have only good intentions in their hearts. But many Americans take for granted the freedoms they have, not because they are bad people, but because that's all they have ever known.

Inevitably, with these types of controls, guns are taken away from one group (citizens) and given to another group (government). [Does government really have your best interests in mind? Whose interests does it serve? Government may be composed of good people at an individual level, but at the macro level can evolve into something much more insidious!] 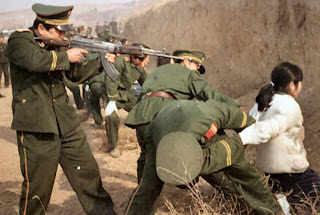 When one group is armed and the other isn't, what is stopping the armed group from forcefully imposing its will on the disarmed group? Trust? Faith in human goodness? Such centralization of power is very dangerous as trust is something that can very easily be broken. After all, it only takes one bad apple to spoil the bunch.

This is what the founding fathers had in mind when composing the second amendment of the constitution. This is the seemingly irrational fear that drives those "crazy gun nuts" to grip their guns so tightly. But is it really irrational when you look at the track record of the governments of the world? If it could happen in Germany, arguably a pinnacle of "civilized" society, what would prevent it from happening in the U.S.?

These things MUST be taken into consideration when dealing with the issue of public safety.

"They that can give up essential liberty to obtain a little temporary safety, deserve neither liberty nor safety"
- B. Franklin

"The world is filled with violence. Because criminals carry guns, we decent law-abiding citizens should also have guns. Otherwise they will win and the decent people will lose."
- James Earl Jones

"The strongest reason for the people to retain the right to keep and bear arms is, as a last resort, to protect themselves against tyranny in government." - Thomas Jefferson

"A system of licensing and registration is the perfect device to deny gun ownership to the bourgeoisie."
- V Lenin
Posted by j_lebling at 5:50 AM No comments:

Response to "Rugged Individualism as a Myth"

The reality is that, for most of us, the world is a cruel, unjust and uncaring place. This is because as humans, we only have a finite amount of resources to satisfy the infinite amount of desires and needs that each of us hold.

The fact is that there are very few people on this planet who have your best interests at heart; if you are lucky, you may have a caring family and a close knit circle of friends that you can trust. Many people do not even have this luxury. Think about it, more people would not care if you died tomorrow than people who would. Others would even go so far as to kill you to take what you have. This is a reality that many of us living in "prosperous" and “peaceful” industrialized nations have not been exposed to on a large scale for several decades. Death, conquest, war, famine, disease goes on across the globe now as it has since the beginning of history. Homo sapiens are a species of war, as much as we are a species of peace. For the purpose of my argument this is undeniable, and you only need to look at our history books to see that this is true.

This harsh reality is not necessarily due any inherent human malice, but rather, and I repeat myself, due to the fact that, on this planet, we only have a finite amount of resources to satisfy the infinite amount of desires and needs that each of us hold. No amount of fantastical idealizing can change this fundamental truth about human nature. Try “getting along” with the asshole who is mugging you at gunpoint, or the foreigners pillaging your home, and see how far it gets you.

I, as an individual, am the one who is in the best position to make decisions regarding my well-being, not the members of the politico-banking apparatchik, i.e. my “elected representatives”. This is because none of them see the world through my eyes, know the challenges that I face, the desires I seek to fulfill, or the strengths and weaknesses that I possess. Furthermore, I know that it is human nature to be greedy, so I am not surprised by how corrupt our institutions are. Power brings out the most ruthless and Machiavellian traits of man. So even though their slogans may be really catchy, with slick rhetoric that pulls at my patriotic heart-strings, I know that politicians do not have my interests at heart. This is because the politician’s principle function is to gain more political power. The good ones are amorphous creatures that charismatically reflect the desires of wants of the populace in exchange for votes.

I do not buy into the farcical charade that passes for "politics" these days. The left-wing/right-wing dichotomy playing out on television caters to the primitive human "us" vs. "them" mentality. This is a great strategy for the powers that be to divide and conquer the voting population on minor issues. But I am not fooled; Republicans and Democrats alike are two heads of the same monstrous war mongering, freedom suppressing, corporate welfare leviathan. To label me along that spectrum is to miss the point that I am trying to make.

As a "rugged individual" my goal is to be self-sufficient and autonomous. I wish to accomplish my goals from my own blood, sweat and tears, because the fruits of my own labor are sweeter than any fruit given to me without. Do not make the mistake of believing that I view myself as living in a vacuum, for I do not dismiss the great works and achievements of the forefathers and foremothers before me. Rather I view myself as a carrying the torch and nurturing the fire which I will be passed onto the next generation.

As a “rugged individual” I extend my interests, not through force and coercion - the method of choice for governments around the world - but rather through the mutualistic symbiosis which characterizes the principle of the free market. I use reasoning to develop ideas that are my own, adjusting and often reversing my stance on an issue in light of new evidence. I do not like being told what to do, how to behave and how to think. I have a disdain for authority, because authority does not treat an individual as a free-thinking rational being. As an individual, I know that I must fulfill my own needs before I can consider the needs of others. This means that, first and foremost, I take care of myself, and then I take care of my family, then my friends, then my neighbors - in that order.

All of this to say, Mr. Spindell, that I am insulted when you say that I do not exist and am just a myth! But I forgive you sir because I understand that nowadays, men and women of prudence, temperance, justice and fortitude such as myself, do not come by very often. I as a “rugged individual” understand that any promise of a utopia is a lie. Nobody will make my dreams come true but myself, and I will take on all the pain, suffering and ridicule that is required to do so. No chains can shackle me, no cage can hold me. I would rather die standing than to live on my knees… All very cliché I know, but true nevertheless.
Posted by j_lebling at 7:38 AM No comments:


Though I do not question your good intentions, your fundamental misunderstanding of basic market principles undermines your argument.

We need only to look across the Atlantic at our Club Med friends to see the most recent example of social security spending gone wild.

The U.S. can postpone this fate due to its global reserve currency status by issuing more debt. BUT, this economic hegemony exists due in large part to the U.S. global military force projection.

The laws of supply and demand exert their influence, and the higher this fiat bubble gets blown, the bigger the pop will be when it finally bursts... The pages of history are filled with numerous examples (but never on such a massive scale).

It would be naive of me to expect that my words would change anybody's opinion on the matter... So I'll let the unfolding reality take care of that!